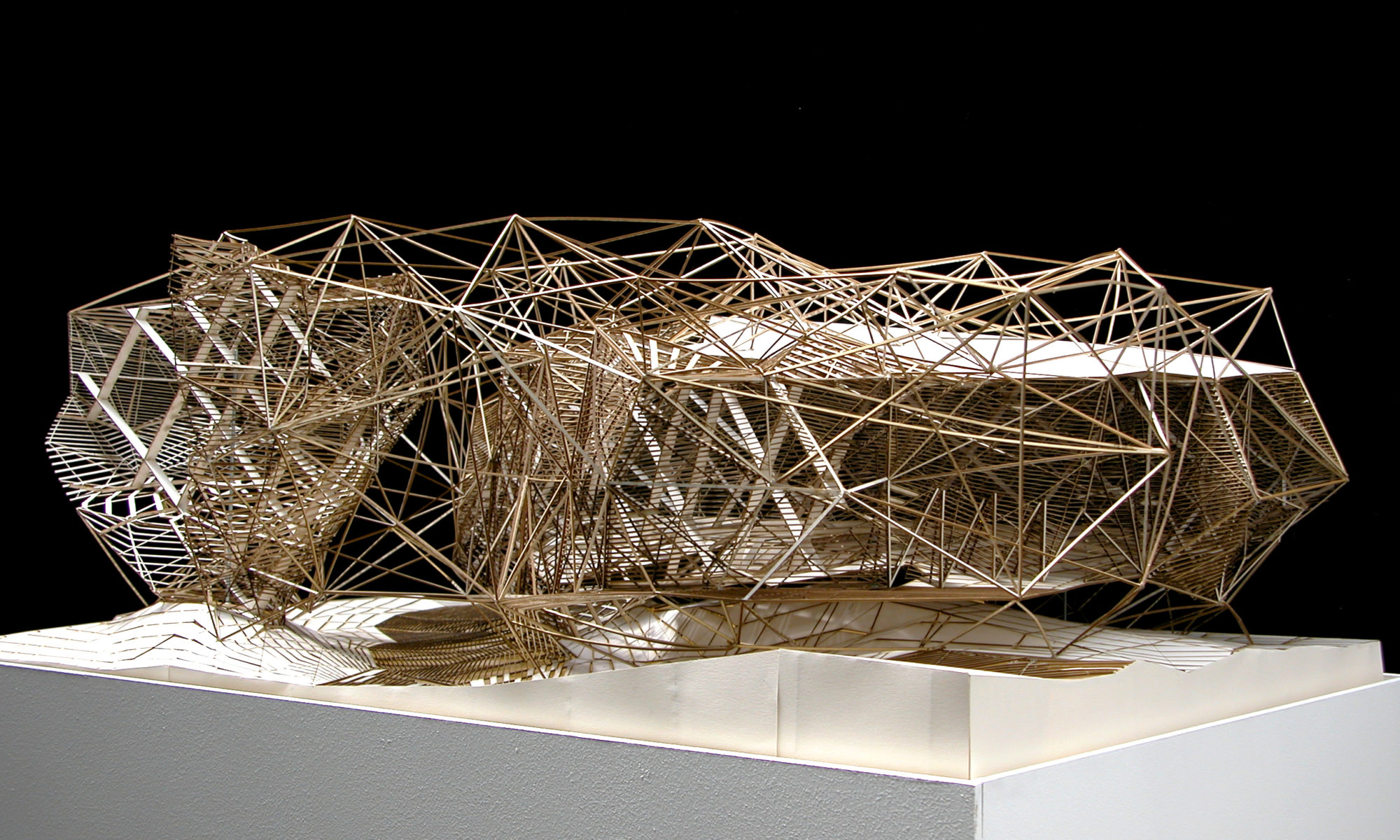 Jyväskylä is a town located in central Finland’s lake-district. It is internationally renowned for its art and music scene and festivals, as well as for its higher educational institutions particularly in Music, the Arts and Cultural Research. Jyväskylä it is also famous for having been the hometown of Alvar Aalto for the periods between 1903 and 1916 and again from 1923 to 1927. Aalto established his office here together with his wife Aino between 1923 and 1927. The omnipresence of Music, Art and Aalto in Jyväskylä makes the Music and Art Center project a great challenge for architects that search for alternative spatial, formal, material and programmatic agendas.

OCEAN NORTH’s design for the Jyväskylä Music and Art Center commenced with the competition entry produced in 1997 [Phase 01] and continued with redesigning the project for the Venice Architectural Biennale 2004 [Phase 02]. Phase 02 retains the principle design ideas of the competition scheme, while re-defining its geometric, spatial, material and ambient articulation. The design of Phase 02 evolves from an iterative morphogenetic process that responds to the theme of the Venice Biennale 2004: the Metamorph for which the project was commissioned.

Situated on the perimeter of the Church Park Square in Jyväskylä, the Music and Art Center completes the urban grid and block structure with a simple box volume. Located across the road from Alvar Aalto’s City Theater, the Music Center inverts the theaters formal logic. While the City Theater is formally highly articulated on the outside, the Music and Art Center’s appears simple on the outside and exceedingly articulated on the inside. The interior of the box provides highly differentiated spatial, material and ambient experiences and extends the space of the town square park into an acoustically animated interior landscape. The varied directionality of material systems and material effects induces the perception of a force-field or flow. It registers a dynamic within the tectonic of the scheme. In its formal language the project defines a landscape of unfamiliar spatiality, geometry and material effects for Music and the Arts.

Since summer time is short in Finland the question arises as to what happens to those many kinds, scales and layers of outdoor festivals and animated street-life during the cold seasons. In response to this question the project aims to provide for an interior event space that does not only cater for the formal symphonic and orchestral events and art exhibitions, but also for informal small scale cultural activities that take part in the streets and parks. The lattice structure that articulates the interior provides therefore for surfaces that can act as small ad-hoc stages, theatres, seating areas, exhibition areas, etc. and invite informal events and activities into the building . While the highly differentiated space of the Music and Arts Center provides potential for these types of informal events it also involves the actual material systems in creating a hyper-articulated space of acoustic and visual intensities. The material systems that make up the building are partially sound-active. This extends acoustic experience beyond the interior of the actual music hall and rehearsal room into the interior landscape of the building volume. The sound-active systems can either be programmed such as to perform a composed piece and/or to respond to local movement pattern of visitors and performers inside the building .

The layered envelope of the Music and Art Center consists of a simultaneously transparent and reflective skin made from glass and ‘Magic Sheet’. Through the layered envelope the by-passer can catch glimpses of the varied, directionality and density of the structures and volumes drifting and swerving inside the box. Depending on the relational light conditions between inside and outside the by-passer can see more or less of the interior. With the exterior light source being stronger than the interior one, the façade is more reflective than transparent. With the interior light source being stronger then the exterior one the façade is more transparent than reflective. With the exterior and interior light conditions locally varied the transparency and reflection of the envelope too becomes locally varied across a gradient. The layered gradients of reflection and transparency result in the perception of a boundless space of indefinite depth.

The various systems of veering lattices result in a space whose bounding thresholds can always only be partially perceived. While the space of the box can be clearly comprehended as confined, it can not be perceived from the interior as a whole and as finite. Directionality, density and layering of the lattice and the buoyant surfaces and volumes that evolve from it result in the perception of a vast space that always continues somewhere where it can not be seen.

Morphogenesis encompasses the process of formation of the structure of organism, as well as the process of growth and differentiation of tissues in living nature. Working with such processes in design is based on the realisation that the product of a bottom-up iterative growth process can become at each step more informed and its performance capacities increasingly interrelated in a coherent and synergetic manner. In contrast, a typical top-down compositional mode of design the product is merely a choice between one arrangement and another with uncertain increase in organisational coherence.

OCEAN NORTH devised an iterative morphogenetic process that grows the project bottom-up. The scripted growth process evolves primary, secondary and tertiary lattice systems and is informed by rules pertaining to 1] the location, orientation and density of the struts that make up the lattice systems; 2] structural, light, acoustic and other functional requirements; 3] phase 01 design guidelines. The resulting lattice systems inform the geometries of the terrain, structure and envelopes of primary and secondary spaces and surface areas, circulation system and the sound-active system. The growth process commences from the definition and distribution of virtual volumes informed by the programmatic requirements of the competition brief. Subsequently a first set of definition points and search rules are defined that distribute and orientate the struts that make up the primary lattice system in response to the above outlined rule-set. From the primary structure a second set of virtual surfaces are defined on which a new set of definition points are derived. In a further iteration secondary and tertiary lattice systems are evolved that define mesh-like enclosures for the required internal volumes, and circulatory and sound-active systems.